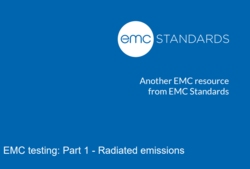 I recently published this blog, detailing a simple proven method for estimating the radiated E field with  specified test setup.

As a result, I received the following feedback...

'This model is wrong for equipment tested over a ground plane as described.

The complex correct transmission line model (less the ground plane) is given by Balanis, and a simpler but accurate envelope is given by Ashenberg and Grasso (contact me for copy of paper if desired). The transition from electrically short to electrically long occurs at a half-wavelength, not a quarter, as assumed by the electrically short (Hertzian) dipole model.

The ground plane correction is a 20 dB cancellation, not an additive factor.

One obtains the current by measuring it, not assuming that cm is some fraction of line-to-ground current.

Unless the test sample will be used on a ship, there is no green wire.

The calculation I describe is for horizontal polarization. For vertical at such frequencies one can either look to line-to-ground potential, not current, or at some point, displacement current becomes significant and a factor for vertical polarization.'

All I am doing in this blog article is restating what has been common knowledge in the EMC world since before 1983. I was trying to rescue it from the academic world by showing how it can have valuable practical applications for product designers – who can use it to predict with fair accuracy whether their products are likely to pass radiated emissions EMC tests.

After all, there’s no point in sending a product for a costly test in an EMC laboratory if it stands no chance of passing! The kind of tests they do cannot localise the causes of test failures, so it is very much better to use low-cost, quick, near-field probing techniques to find the precise locations and causes of EMC problems, and fix them until the RF Current Monitor clamping method briefly described in my blog shows that a ‘proper’ radiated emissions test in an EMC test lab has a good chance of being passed.

You will see the reference in the blog to Clayton Paul’s 2nd Edition in 2006, but the same formula was published in his world-renowned 1st Edition in 1992.

The same formula appears in Edition 2 of “Digital Design for Interference Specifications” by David L. Terrell and R. Kenneth Keenan, published in 1997 (ISBN 0-7506-7282-X) as well as in their 1st Edition – published in 1983.

And Tim Williams has included this formula in the appendices to every one of the five editions of his world-famous textbook “EMC for Product Designers” since 1992.

In the radiated emissions measurements that are the subject of this blog, considering the CISPR 22 test method, it is well understood that the use of a metal ground plane causes a reflected ray to arrive at the antenna with a different path length (hence phase) to the direct ray from the equipment under test. This causes phase-addition/cancellation and is the reason why the test method requires varying the height of the antenna over about 4 metres to find the maximum emissions at each tested frequency.

This maximum occurs when the direct and reflected ray paths are perfectly in-phase, and is the very reason why the test limits are set 6dB higher than they would be if the same test was done in an anechoic chamber with no reflected ray.

It is very clear that your comment: “The ground plane correction is a 20 dB cancellation….” must be in relation to a completely different issue than the one addressed by my blog.

The whole point of my blog is about measuring CM currents and using the commonplace formulas I provide to predict results on standard EMC radiated emissions tests.

So, I have no idea how you came up with the sentence: “One obtains the current by measuring it, not assuming that cm is some fraction of line-to-ground current.” which bears no relation whatsoever to anything in my blog.  Later comments in your email are similarly inappropriate, and I shan’t bother to respond to them.

You do not appear to have taken the trouble to actually read my blog article – or, if you did, you failed to understand it despite my very best attempts at making a low-cost EMC diagnostic technique available to electronic engineers who know little/nothing about electromagnetics. Perhaps you applied too much EMC knowledge to it?

May I suggest that you try to put any preconceptions aside whilst actually reading my blog article through again?

Hopefully, you will then ‘get’ what it is about.

All the very best