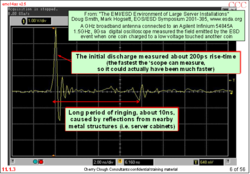 In the 1980s, the equivalent of the current IEC 61000-4-2 ESD test used a 5ns risetime, because faster risetimes were not necessary to replicate the real-life ESD problems suffered by the ICs of that time. This was reduced to between 0.7 and 1ns when IEC 61000-4-2 was first published in the 1990s, because by then semiconductor die-shrinking had made ICs susceptible to shorter risetimes.

Semiconductor die-shrinking every 18 months to two years is a fact of life in the electronics industry, and the resulting ever-smaller transistors operate faster and so can be upset by ever-shorter transient risetimes. Their ever-thinner insulation layers can be damaged by ever-lower peak transient voltages. Their internal I/O protection diodes may be smaller, hence less effective, and might even be omitted because they displace many hundreds of millions of transistors!

The result of continual semiconductor die-shrinking is that ESD protection is always ever-more difficult. And because die-shrinking affects all ICs, not just new types, products in serial manufacture can start to suffer ESD-related failures in their operating environments even when their design has not changed. They become more susceptible to real-life ESD every 2 years or so, and I know several manufacturers for whom this fact alone has caused large warranty costs.

“In our opinion, the ESD standard should be revised such that ESD generator performance is as similar to the reference events as possible in all their parameters. But manufacturers and users need to be aware that the standard does not cover all possible ESD events. For example, medical equipment might need to be tested using a shorter rise time to cover a larger portion of the real ESDs, notwithstanding furniture ESD or other ESD types.

The standard needs to be understood as a minimum requirement, passing it does not protect against ESD related field failures.”

Also in 2004, Fischer Custom Communications sold an ESD field simulator called the PEG-1, with these words in its advertising flyer:

“The PEG-1 simulates forms of ESD in the environment that are not covered by current standards. The electromagnetic fields from these types of ESD events have been shown to cause problems in electronic equipment. Characteristics of these “unusual forms of ESD” include fast risetimes and multiple events over a few seconds. Examples include internal chair discharges and “jingling change”. Descriptions of these events can be obtained from the published papers in the “Technical Information and Downloads” section of http://emcesd.com.

The PEG-1 induces voltage in nearby circuits with risetimes of about 200 picoseconds, much faster than present ESD standards. The ringing frequency of the PEG-1 ranges from hundreds of MHz to greater than 1 GHz. In addition, about 3-7 events/second are generated by the PEG-1. All of these PEG-1 characteristics simulate real world events of this type.”

The PEG-1 no longer appears on Fischer Custom Communications’ website, but may be available for hire or purchase second-hand, perhaps from ESD Guns or ebay.

“It seems that ESD is getting even more of a problem lately with strange forms causing new problems. There is no shortage of articles and information on standard tests, but often a custom test is necessary to avoid field problems.

Issues concerning cable discharge, slow degradation over time in the field due to small to moderate, but very common ESD events, and others are developing. I would be interesting to hear how you are dealing with these problems and I have included some links below.”

An issue alluded to in the quotations above, is that IEC 61000-4-2 only concerns ESD caused by people becoming tribocharged and touching things, which is called ‘personnel ESD’ or ‘the Human Body Model’, HBM.  It doesn’t cover “Furniture Discharge”, mentioned in the first two quotations, and also mentioned in EMI Story number 138. And “precipitation static” has been a particular problem for aircraft radio-comm’s, see EMI Story number 295.

There are many other sources of ESD, as has long been recognised by semiconductor manufacturers, who have a constant battle to prevent ESD in their manufacturing plants from damaging their products even before they are supplied to product and equipment manufacturers.  The EOS/ESD Association, Inc., identifies: Human Body Model, HBM; Machine Model (MM); Charged Device Model (CDM); and Field Induced Discharges.

Many researchers have investigated the so-called “micro-gap discharges” occurring between charged metal objects with less than 100V potential difference across gaps of a few microns, with some evidence that their risetimes can be as low as 10ps – which is very difficult indeed to verify experimentally. In [3], Doug Smith focusses on the micro-gap discharges that occur between jingling coins in a pocket or bag.

People can only reliably feel sparks from their fingers when they exceed 4kV, and they only start to feel really painful at 8kV and above. But some modern semiconductors can suffer permanent damage from less than 0.7V (which I have found can cause latch-up failures in Si-Ge low-noise microwave amplifiers).

And with modern digital ICs such as DDR4 RAM chips running from power rails as low as 1.35Vdc, data corruption can occur with ESD transients as low as 0.5V peak.

The word from the IEC TC77 committee is that they have no plans to reduce the risetime in IEC 61000-4-2 below 0.7ns to better suit modern real life ESD susceptibility. So we are forced to develop our own ESD tests, as Doug Smith says above.

In 2013, it was said that typical digital ICs needed protecting against ESD with 100ps risetimes (i.e.  up to at least 3GHz) and peak voltages limited to 10V (ideally, kept to within the power rails).

Because we have had three die shrinks since 2013, we should probably use 50ps risetimes (i.e. up to at least 6GHz) in 2019. See section 1.18 in my training course Module 1 for how to determine the highest frequency of concern (which I call fMAX) for the ICs used in a product or equipment.

So, how can we extend our ESD testing to cover risetimes of less than 0.7ns?

The Thermo Keytek MinZap MZ-15 was measured in [1] as achieving 150ps risetimes with its discharge network shorted-out. Like the PEG-1 the MZ-15 is not a current model, but there are many of them available second-hand, e.g. from ESD Guns, and Ken Wyatt wrote an article in EDN on refurbishing them. If you want to modify MZ-15 risetimes, make sure to buy the model with a plug-in discharge network module (they also sold a model that had a fixed internal IEC 61000-4-2 discharge network, which is very much more difficult to modify).

For even shorter risetimes, we probably have to make our own micro-gap ESD sources similar to Doug Smith’s bag of coins in [3]. Test labs should use transparent bags containing gold coins to impress customers, but the rest of us can make do with low-denomination plated steel or copper coins in any type of bag. It is of course important not to use a static-safe bag!

It is not necessarily 'overtesting' when we do more / go further than the requirements in the ‘applicable’ standards.

Different manufacturers make products that are used in different ways, which will experience different electromagnetic threats including ESD – and if they pay attention to their warranty complaints they may notice that by 'overtesting' certain issues (such as ESD) they get fewer field failures and so make more profits. Or they might get more satisfied customers who buy more in the future, reducing the cost of sales and making more profits again. Or both.